While the graphical marking scheme processes allow you to produce a graphical translation of the student data to print on reports, such as ticks and crosses, these are text translations, making use of fonts such as Wingdings.

A much more powerful option available in Accelerus uses graphic functions which convert data into drawings or pictures, as shown in the three examples below.

This first example, shows the distribution of achievements in a particular assessment item across the whole subject, represented in a bar graph. 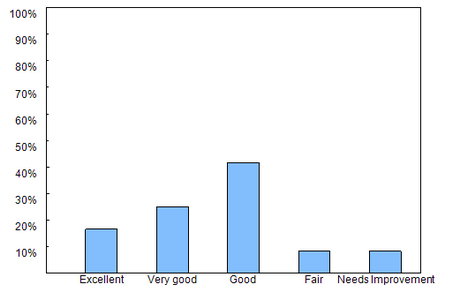 This second example, shows one of the ways a student’s performance may be plotted in relation to the distribution of results across the class, in this case in a 15 point scale which translates to A to E scores.

Graphic functions are imported into the Accelerus database, via File > Import > Graphic Function.

The calculation example below has been added to an assessment item coded WHI_G. It uses a custom graphic function called WorkHabit3Pt. The graphic that is produced by this has a width of 105mm and height of 4mm, and uses the data found in the assessment item WH1. It is actually this graphic function and calculation that has been used to produce the work habit graphic in example three above.